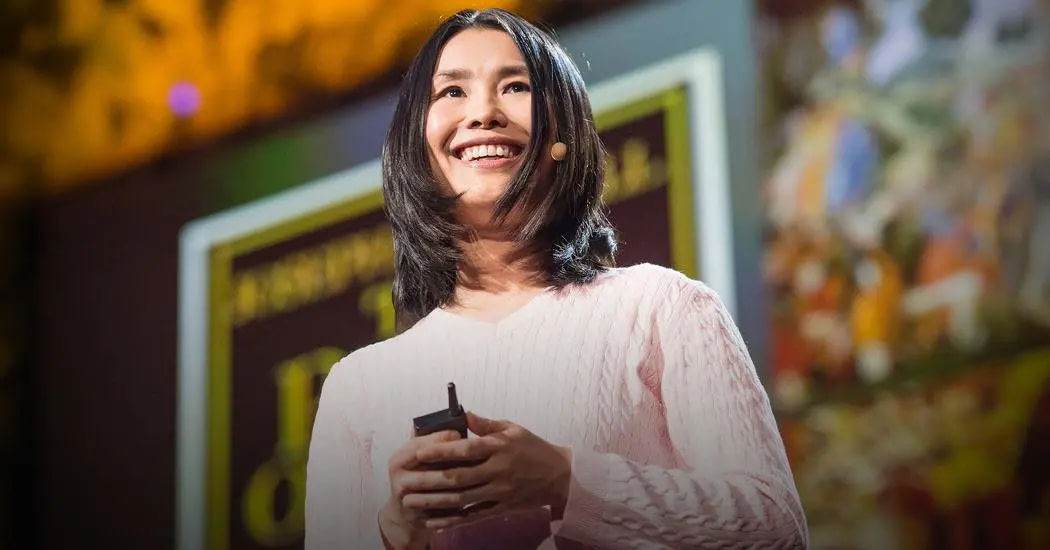 How Do Books Open Minds?

Born and raised in Hunan, China, Lisa Bu has been at TED since 2011.

Before that, he spent seven years on Wisconsin Public Radio as a talk show producer and digital media content director. He is also a computer programmer, holds a PhD in journalism and an MBA in information systems from the University of Wisconsin-Madison, as well as a BA in Chinese from Nanjing University in China.

To become a gymnast, I trained for two years in Hunan Province, China in the 1970s. When I was in first grade, the government wanted to send me to an athletics school, all my expenses would be covered. But my tiger mother refused this offer. My parents wanted me to be an engineer like them.

After surviving the Cultural Revolution, they firmly believed there was only one path to happiness: a secure and well-paid job. It didn’t matter if I liked the job or not. But my dream was to become a Chinese opera singer. Here I am playing my imaginary piano. An opera singer must begin his training at a young age to learn the acrobat. That’s why I tried everything, did everything I could to go to opera school. I even wrote a letter to the school principal and a radio programmer. But no adult liked the idea. No adult believed that I was serious. Only my friends supported me, but they were children too, so they were as weak as I was. By the time I was 15, I knew it was too late for opera training. My dream would never come true.

I was scared when I thought about the rest of my life. My hope was to have second-rate happiness at best. But that wasn’t fair at all. I was determined to find something else that I would strongly want.

Is there no one around to teach me something? So be it! I also turned to books. I would satisfy my hunger for advice that I couldn’t get from my parents with the book “Fou Lei’s Family Letters” written by a family of writers and musicians.

While the Confucian tradition required obedience, I found the independent female role model I would imitate in “Jane Eyre”. I also learned to be productive from the book called “Blessings for the Herd”. And I was tempted to study abroad after reading the following books: “All Works of Sanmao” (“Echo Chan”) and “Lessons from History” by Nan Huaijin. I came to the USA in 1995. What books did I read first in this country? Books that are banned in China, of course.

“The Good World” was about the life of Chinese peasants. It wasn’t suitable for propaganda, I understood. The Bible was interesting, but strange. (Laughter) It had a topic for each separate day. But with the fifth commandment, I realized something: “You must honor your mother and father.” “Honor?! So different and so much better than obedience,” I said to myself. So the Bible has been my tool to break out of this Confucian tradition of self-blame and restart my relationship with my parents. Meeting a new culture also gave me the habit of comparative reading. This habit has increased my understanding of many subjects. For example, I found this map inappropriate at first, because that’s how Chinese students grew up. I never thought that China didn’t have to be the center of the world. A map essentially reflects a person’s view. Comparative reading is actually nothing new. It is standard practice in the academic world. There are even research areas such as comparative religion and comparative literature. Comparing and contrasting allows scholars to fully understand a topic. So I thought: if comparative reading works in research, why not use it in everyday life as well? So I started reading the books in pairs.

Books have given me the key to a magic door to connect with people of the past and present. I know I will never feel alone or powerless again. The destruction of their dreams is in fact completely insignificant compared to the suffering of other people. I finally realized that the sole purpose of a dream is not to come true. The most important purpose of a dream is to enable us to connect with the point where dreams, passion and happiness originate. Even a shattered dream is capable of doing this for you. So if I’m mostly happy today and have a purpose, a clear worldview, it’s because of books.

Books should never be missing with you.